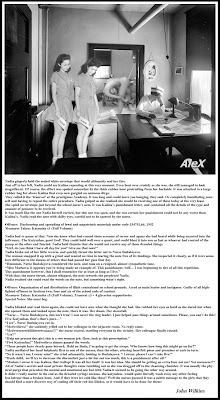 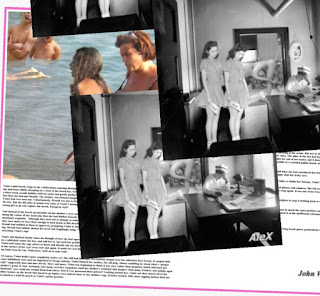 Regarding the private picture for the VIPs, a few sentences from John Wilkins' brillant story will best describe its content I guess :


All thoughts of winks and dances vanished from Violet’s head just as the seashells dropped from her hands. Her attention was now divided between the newly arrived and not at all welcome sting atop her left bottom cheek, and the looming form of her mother, giving her a look more disapproving than anything Violet had imagined thus far.
“ M-Mom! What are y-"
“I believe it’s me who should be asking the questions here Violet Elaine Thomas.” her mother cut in curtly.
“Where on Earth is your top girl?” the stern woman demanded, emphasizing her question with a flick to Violet’s stiff, puffy nipple.
That flick jolted Violet back to her senses, and she quickly moved to cover breasts after the initial shock of being caught by her mother had left them visible to all and sundry.
“And just what are these?” Violet’s mother continued, grabbing the waistband on Violet’s thong and letting it snap back on to her skin, much as Violet herself had done moments ago to impress the boys.
“I never saw you wearing these earlier Violet. I’ve never seen you wearing these at all young lady!”
Violet had heard her mother use that tone before. It only ever led to one thing. She tried to salvage what she could of this fiasco.
Before Violet could make any kind of case for herself her mother’s hand began letting its owner’s displeasure known in no uncertain terms.
Smack after stinging smack exploded against Violet’s poorly protected hindquarters as she hopped and skipped in an apparent celebration of futility.
She threw one hand back almost on instinct and found it immediately seized in a motherly clasp. She still had the presense of mind to keep her other arm across her chest.
Then she felt a sharp tug on her waistband. What was her mother doing? Surely she wouldn’t…
She just had. And it was only the resumption of that vicious barrage to her now completely bare backside that forced Violet to look up from the mesmerising view of her own freshly exposed privates.
It didn’t take long after that for Violet to utterly abandon all of her previously unshakable inhibitions. The free hand covering her bosom joined its counterpart in an ill-fated attempt at shielding her embattled bottom. It then promptly suffered the same fate, and was trapped in Ms. Thomas’s firm grasp.
Violet was now dancing as she’d never danced before, DJ be damned. She couldn’t hear much but the staccato rhythm of her mother’s beating palm, each beat bringing more colour to her cheeks and tears to her eyes. All was a haze now, blurred by the pulsating flames radiating from her behind.
Violet’s so carefully guarded treasures now bounced and swished and winked about in a dazzling display of wild, if unwilling abandon. "

Barbara's artwork WITH the kinky story

John Wilkins' feather really matches with Barb's bittersweet universe, and so she has agreed to let him translate into words an old picture of hers, and post it here.

Original size and readable HERE . Just save and zoom in!